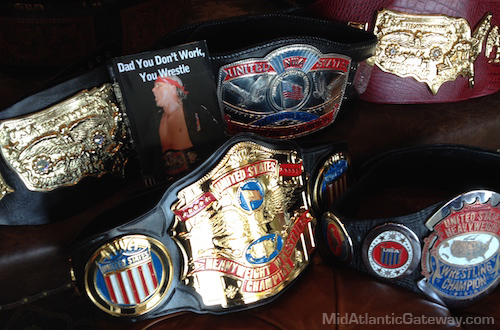 2nd Greatest book ever written with 5 of the greatest belts ever. These are all of Jim Crockett's U.S. title belts from 1975-1988! Actually all are replicas.... except one. One of those belts is actually the original championship belt worn in the ring and defended everywhere for Jim Crockett. Can you tell which one? Hint: only three men wore it: Sgt. Slaughter, Wahoo McDaniel, and Greg Valentine.

Dang. I owe Gateway big for this picture!