The Mid-Atlantic Gateway has posted a story about my 1988 match with Ric Flair on Superstation WTBS.  The Gateway is my favorite website, by the way. I wrote in my book "Dad You Don't Work You Wrestle" that I found my own Noah's Ark and it was full of Mid-Atlantic Wrestling stuff. That's the Gateway.

Here's the first part. Click the link below to read the whole story!

I've written before about all the stories that George South has told me over the many years we've been good friends, and usually I find myself not believing half of them. I mean, come on - - wrestlers tend to tell tall tales, am I right? And George loves to tell a good story. But then someone comes along that was involved in one of those stories and says something that confirms his story and I wind up calling him and confessing  - - "You were right!" 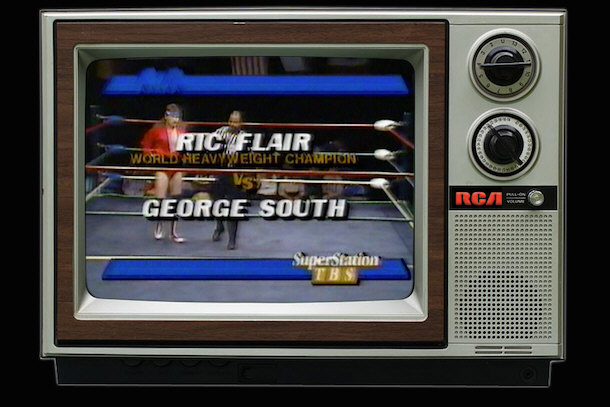 Such was the case on a recent episode of the "WOOOO! Nation" podcast, when Ric Flair and co-host Conrad Thompson were taking questions sent in by fans. One question dealt with wrestler Mike Jackson and why he never quite got a break to move up the cards back in the day. Jackson was thought of at the time (and still to this day) as one of the best underneath workers in the business and all the main event guys liked working with him.

But Flair moved on quickly from Jackson and said this, which confirmed part of a story George had told me long ago:

"You know who was actually the best worker back then, was George South .... I got in the ring with him one time and I said, 'Buddy, today you're Ricky Steamboat'. And we tore it down."  - Ric Flair, WOOOO! Nation, December 9, 2015