Throwback Thursday: Somebody Take The Money


Jason Jones told us about showing an online video to Harley Race while kicking back one afternoon in the World League Wrestling office.

Jason is a great young wrestler who was trained by George South back in the early 2Ks, and has wrestled for NOAH in Japan and had a few appearances in the WWE. Wrestling as Harley's son Leland Race, he is currently the World League Wrestling Champion for Race's WLW group in Missouri, and is heavily involved in running the front office for that company.

Back in 2005, George South was involved in a feud with Brad Anderson (son of the late great Gene Anderson of the Minnesota Wrecking Crew) over the EWA championship in North Carolina. George put a bounty on the head of Anderson in hopes that he wouldn't have to put the title up against him. We got the idea at the time to do a video about the bounty and copy the memorable video Harley Race did in similar circumstances back in 1983 with Ric Flair. Then for fun, we took both videos and blended them together.

It was that edited video that Jason showed Harley in the office that day:


Harley is like a lot of the veteran stars from days gone by. He appreciates the respect shown him by the younger generations. Harley had a smile on his face as he watched the video, and seemed to appreciate the tip of the hat.

But he also had one more comment to Jason about George: 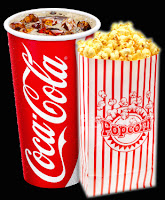 "Cokes and Popcorn" are little stories of humor and respect that I come across along the way of putting the Mid-Atlantic Gateway website together, and they are little stories I want to hang onto. Not sure where the name of the section comes from; I just find these little stories refreshing.
More Cokes & Popcorn: "Never Let 'em See You Sell, Kid."