George South has a knack for finding the most obscure references to wrestling in just about any book he picks up. It's uncanny. The best example of this was probably the time he found a book in a used bookstore for $1.00 that talked about the first season of the NFL Carolina Panthers in Charlotte. In that book, which had been tucked away in the back of this old bookstore, covered in dust, probably never to be read again, George finds a picture of Mid-Atlantic Wrestling legend Johnny Weaver when he was a deputy sheriff for the Mecklenburg Sheriff's Department. Johnny was helping with crowd control in security at a Panthers game.

What were the odds? Only George could find that! There are countless other examples, too. There have been references to Wahoo McDaniel in a New York Jets football history book, more things like that. 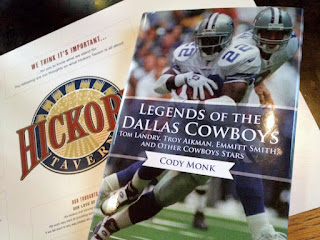 The most recent example was in the book "Legends of the Dallas Cowboys" by Cody Monk, which was a collection of stories and memories about the great legends in Dallas Cowboys history.

I had given this book to George for his birthday. We were meeting at a local Hickory Tavern restaurant for dinner and to watch the Cowboys play the Giants the opening weekend of the 2015 season on Sunday Night Football. I even told him when he was first looking through it, "I bet you anything you will find some reference to wrestling in there."

I figured it would be perhaps a reference to one of the old-timer players having been a wrestler at some point. A lot of professional football players were part-time pro wrestlers back in the day before the NFL and AFL players made a great deal of money. Some, like Wahoo McDaniel, made more money in a summer of pro wrestling than in an entire season of football.

So about a week later George sends me a text with a photo attached of a passage in the book about Kerry Von Erich winning the NWA world title from Ric Flair at Texas Stadium in 1984.

Well, I'll be darned, he did it again!

The passage was in a section of the book devoted to memories about the old Texas Stadium in Irving, TX that was home to the Cowboys until a few years ago when they moved into the new AT&T Cowboys Stadium in Arlington, TX.

Once again, George had found wrestling gold in a random book. And I can just about guarantee you it will happen again at some point down the road.

The following is an except from the "Texas Stadium" chapter in "Legends of the Dallas Cowboys" by Cody Monk, pg. 187:

"Non-football events: In September 1971, Texas Stadium opened its doors with a 10-day revival from noted pastor Billy Graham. Johnny and June Cash performed and future President and First Lady Laura and George W. Bush attended. The event was simply the first of a litany of major events. In 1972 and then from 1984-88, Dallas-based World Class Championship Wrestling, featuring the legendary Von Erich family, held its annual "Parade of Champions" shows at Texas Stadium. The most famous match happened on May 6, 1984, when Kerry Von Erich beat "Nature Boy" Ric Flair for the NWA title in front of over 50,000 fans, only months after Kerry's brother, David Von Erich, died in Tokyo. On the music side, the Jackson Five, Paul McCartney, Elton John, Metallica, Alabama, and Madonna all played at Texas Stadium...."

George and I enjoyed a big plate of wings, thanks to our friend Doug Joyner who had given George a gift card for his birthday. It wound up being a great night as quarterback Tony Romo led the Cowboys down the field in the final minute of the game and threw the winning touchdown pass to my old Tennessee favorite Jason Witten. Dallas defeated the New York football Giants 27-26.

How 'bout them Cowboys?

Sadly, I wasn't with George to celebrate. I had left at the end of the 3rd quarter because of the long trip home late on a Sunday night. I enjoyed listening to the voice of the great Verne Lundquist (filling in for the usual voice of the Dallas Cowboys Brad Sham) make the call of that final drive on XM satellite radio. As Romo threw that winning touchdown, I could only imagine George, being one of only a few people left in the restaurant at midnight, running around like NC State Coach Jim Valvano after winning the 1983 NCAA national basketball championship - - looking for someone to hug.