WOW!! Now I know sharks are eating everybody, I cant drive my 'General Lee' any more, or wear my Freebird make-up. Heck, they even want me to stop using my Hulk Hogan toothbrush. But the one thing that they can't take away from me is my personal relationship with Jesus. This world may pass away but His love for me will never fail. Everybody keeps talking about the past, heck they even want to go dig up an old confederate soldier! But listen to me, Jesus is all about going forward. He doesn't care where you have been. 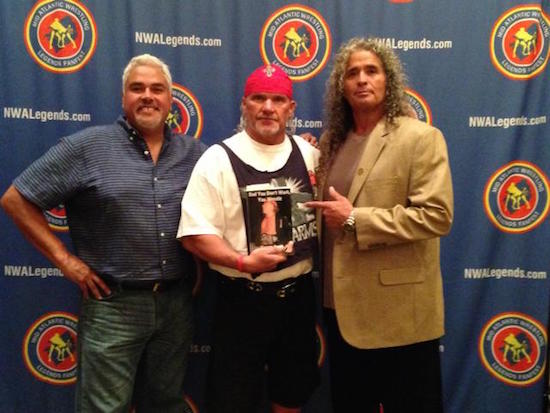 I am so sorry I am late this month with my updates but I have been very busy with the NWA fanfest, my wrestling school, and the 3 prettyest grandbabys of all time. My favorite fanfest moment was getting to see the Mark and Chris Youngblood again after all these years. I want to say thank you to everyone that came up to me and let me know how much they enjoyed watching me wrestle all these years. I gave Lance Russell a copy of my book and he was so grateful that I thought of him.

I was so sad to hear that Rowdy Roddy Piper died. He was one of the all-time greats in Mid-Atlantic Wrestling. We've lost so many of our legends this year.

Can you believe my Cowboys play in less than 30 days? Greg Hardy, the guy that has gives everybody a heart attack, has looked so good in training camp. Maybe their is something to this second chance stuff.

Yeah, we're done, folks. Jesus is on His way! Did you hear about the idoit that taped his PIN number to the back of his ATM card because his girlfriend kept forgetting it? Yep.......your right, it got stolen and guess what? The "Joker" is living it up all over town! I bet you a few Mason Jars from my back yard the guy was a wrestler!!


Hope everybody has their George South wrestling school t-shirts by now. They are doing so good. Stay cool and rent a wrestling ring from me. Makayla said her and Dallas need new school shoes.

God Bless and see you at the matches.